Social Media Marketing Lessons You Can Learn From Justin Timberlake 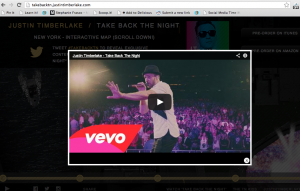 Once upon a time I worked for a small company called Atlantic Records. 🙂 It was a very exciting time in my career, especially as a start struck girl from LA. I worked on some pretty amazing new media (now called social media) projects with major artists, like Diddy and James Blunt. And what I loved about my job was that I worked with some of the most innovative people in the biz. In the music industry, no idea was stupid and no far-fetched idea was “too out there.” We had the talent and built the technology to create some pretty spectacular interactive ads, games and promotions.

To this day, I’m still subscribed to a pretty ripe number of musician newsletters to keep up on what the music industry is getting up to in the interactive and social media world. Recently I received this email from Justin Timberlake which includes a few different interactive elements. 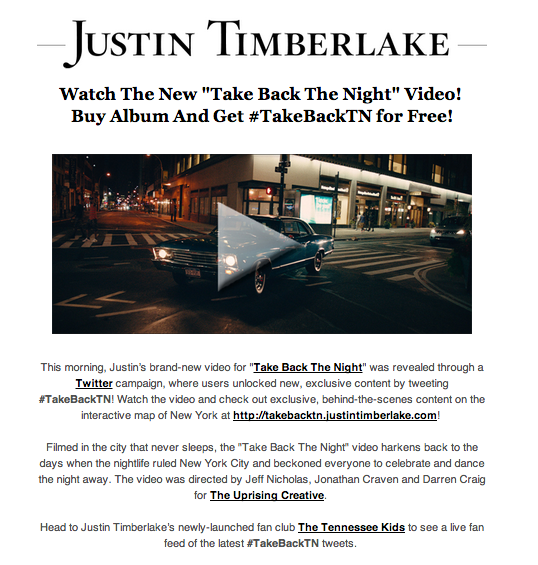 First, it was sent via email. Never underestimate the value of the inbox. I know we get caught up with Likes, and Follows, but emails are huge! People still, to this day, trust them, and it’s a direct way to get in front of your audience and fans. I still love me some social media obviously 😉 but newsletters are not dead, by any stretch of the imagination.

Next, there’s the Call to action, which includes the use of hashtags. This is the beginning of branding a hashtag for people to use. By seeing the hashtag in the headline, the reader’s forced to say, “The brand uses it, so I should, too.”

Now for the fun part, the interactive part. When users Tweeted the hashtag #TakeBackTN, they unlocked new, exclusive content, including this interactive map that features all the places that were filmed for the video. 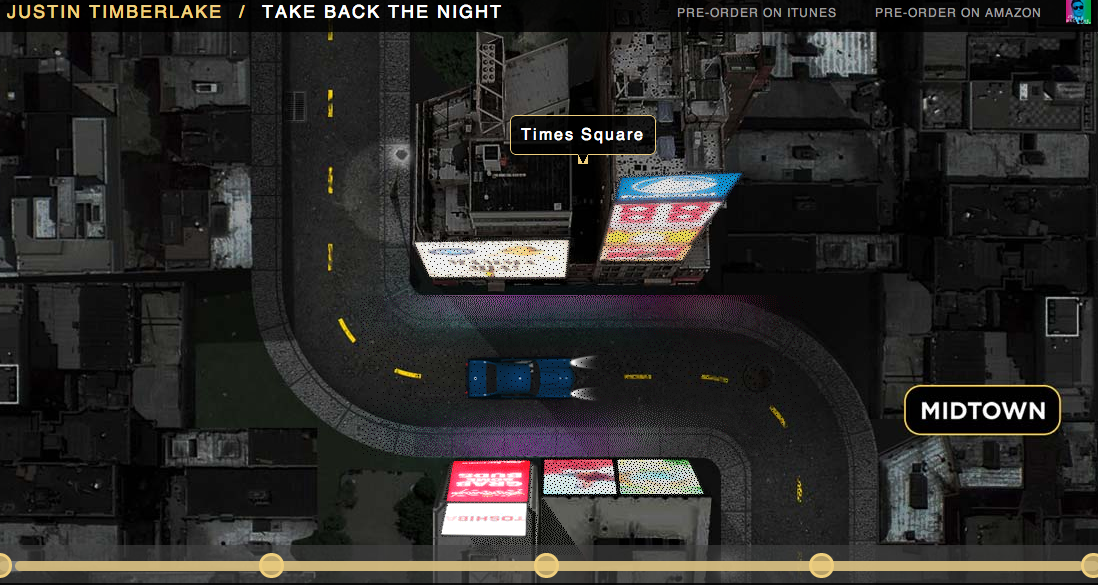 Lastly, he includes a membership site called Tennessee Kids, which is pretty much a shrine to all things JT. By being a member, you’ve got access to things you wouldn’t normally by just being a fan. It takes fandom one step higher. We’ll call them Super Fans.

**Fun Fact – “TakeBackTN” is a play on words. If you’re a JT fan, you know that he’s from Tennessee. Here, the context of the “TN” in #TakeBackTN can either represent the state abbreviation for “Tennessee” or “The Night,” which are the last two words of his song, “Take Back The Night.”**

So clearly, JT has this campaign down. He’s promoting his new album, his new single and encouraging engagement and fan interaction through hashtags and the interactive map of NYC. Plus, he’s adding a level of exclusiveness, just for his “Super Fans.” 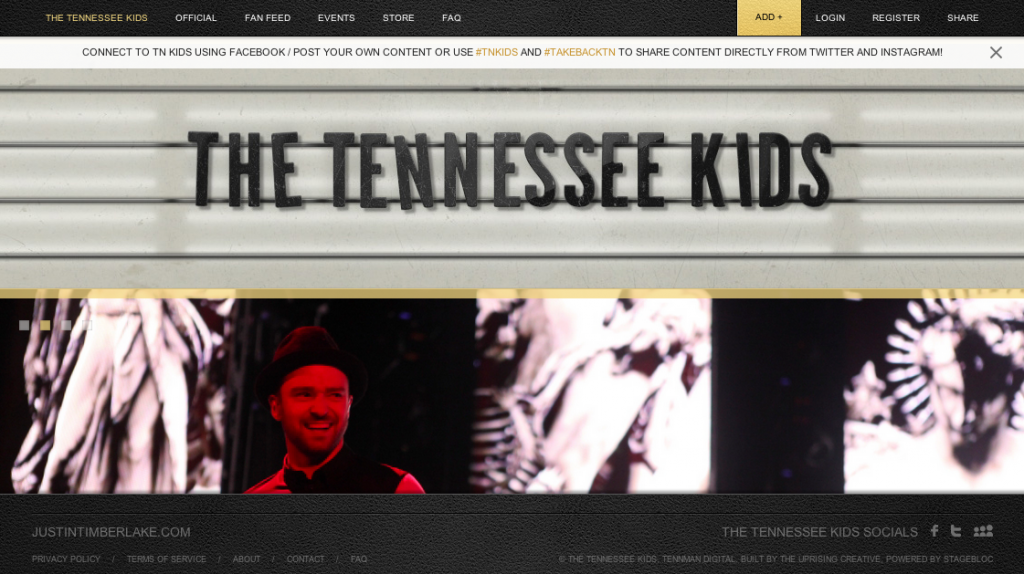 What Marketing Lessons Should You Take Away From This

Small businesses don’t have the budget that huge recording artists like Justin Timberlake might have. I understand that. However, social media gives you the opportunity to create cool, fun, interesting and exciting promotions at a very small cost. You just have to know which tools to utilize.

If you aren’t utilizing a newsletter, you should be. Growing your list is just as, if not more, important than growing your social properties. As I mentioned above, email inboxes are still incredibly valuable. People check them multiple times a day. Penetrate that by placing your newsletter there.

Hashtags have evolved from a search tool, to a way to define your content and who you are. Brands have the ability to forge the shape of a certain hashtag in order to build a community.

Membership sites turn fans into Super Fans. They’ve gone so far to signup for something additional. Here is where your exclusive content can come into play. ConvertWithContent, for example, is an exclusive membership site.

What did you learn from JT’s campaign? I think it’s great and there are many takeaways. What tools are you going to start using to pump up your online presence?

How To Do Keyword Research (A Beginner’s Guide)

What did you learn from JT’s campaign? I think it’s great and there are many takeaways. What tools are you going to start using to pump up your online presence?

I like the idea of creating exclusive content for the more “involved” fans. I feel that it not only gives the fan a sense of reward for their loyalty, but it also gives the marketer more insight into who/what is engaged with their service/product.

Great post and I appreciate the insight into the social media campaign used by Sony Music for its musicians and their fans.

[…] tasks was to search for content to post on our Facebook & Twitter pages. Ever wonder how ?Social Media Marketing Lessons You Can Learn From Justin Timberlake? got into your newsfeed? Yep, that was me? but I bet you clicked on […]

[…] puts his social media savvy to use in marketing campaign promoting his work, as this blog details?as marketer Stephanie Frasco’s blog details. ?In fact, he’s invested in social media, putting up a?major stake in the purchase of […]