Birth Announcements In The Social Age

After 9 months of absolute social media frenzy, the #RoyalBaby has been born. Congratulations to the Duchess and Prince William.

As expected, the Royal Family and their team took to social media to make announcements. And of course, there was the official tweet as well as the official Facebook post. 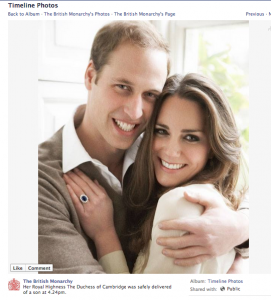 The British Monarchy even crossed over to Instagram, posting a photo officially announcing the birth of the Duke and Duchess of Cambridge’s baby.

Beyond the official posts, the British Monarchy and Clarence House are encouraging users to embrace the use of hashtags in order to send congratulations to the Royal Family. Social media works best from a brand standpoint (and, in this case, the Royal Family is a brand) when it’s a two-way stream and not only about the brand. The Royal Family and Clarence House show that they understand this by asking you to also tell them about any other new arrivals today. By making the birth of this baby relatable to others, the British Monarchy is able to connect with a larger audience and engage more people. Props to them!

I think governments using social media is a great thing, not to mention it’s even become expected. I recently wrote about President Obama and the White House using Instagram video.

GoogleUK is also in on the game.They’ve created an interactive Congratulations Card on G+. In order to sign the card, you need to plus-one [+1] the post. In the event that you’d like to leave a comment on the card, you’ll have to re-share it with your congratulatory message. Supposedly this will all go into an online mosaic card with your greetings and your picture, to be sent to the Duke and Duchess. 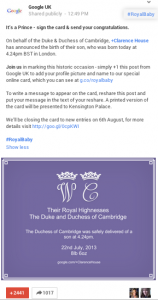 Lessons Other Brands Can Learn From This

By using the hashtag #WelcometotheWorld, the British Monarchy has made this day a celebration for all those born today, not only the Royal Baby.

Again, the use of the #hashtag is a key element here. You want others to talk to and about you. A great way to do that is by asking questions.

3. Use Multiple Networks To Reach Your Audience Where They Like

Your audience may not be exclusively on Facebook. Reach them wherever and however they like to be reached.

4. Cross Promotions Are A Good Thing

GoogleUK is promoting the new baby boy’s birth through its interactive card while also promoting G+ at the same time. 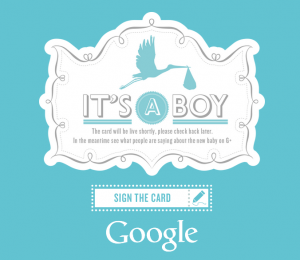 The Royal Family has done a great job using social media to reach and engage its fans.Have you seen any other new media tools being used from an official level?