Okay, I admit it. I’m officially obsessed with Instagram. Now that they’ve launched video I’ve been searching for what works, what doesn’t, and even what could possibly work. During my research quest, I came across First Lady, Michelle Obama’s new Instagram account. 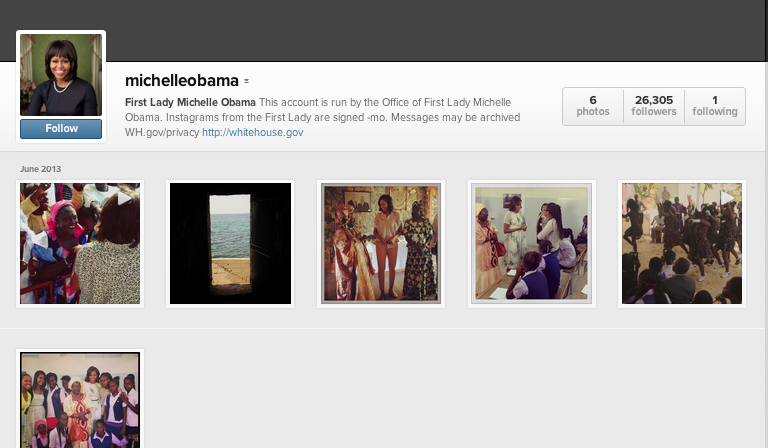 That’s right Michelle Obama has her very own Instagram account. Of course, her account is managed by her team, but when she posts herself, she signs it “-mo.”

Currently the First Family is in Africa. It’s great to be able to see a behind-the-scenes look at her tour there. I followed the hashtag to find #FLOTUSinAfrica and discovered that The White House now also has an Instagram account.

This presidency has been named the first Social Media presidency, and it makes sense. All of this new technology has come about during his term. I’ve come to see the White House on Youtube, Facebook, Twitter and now Instagram. But what really interests me is the fact that The White House is posting mostly videos. The account is very new and coincides well with the launch of Insta-Video. 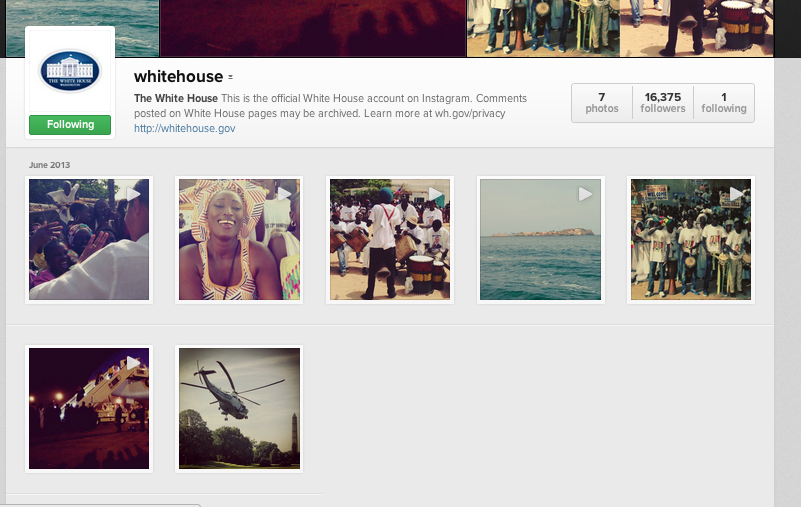 Politics is a strange industry. It can be fueled by propaganda, and there are always a few sides to each story. However, by using video, I feel like there is more transparency in the government. Of course, this is not a Big Brother episode where everything is being filmed and those posting must be very careful about what they post. However, it offers a nice, new perspective. The video is more moving than photos would be, and you can really feel the excitement of President Obama’s trip to Africa.

I personally love that our government is using all different types of social media.Have you seen any political figures using new social networks effectively?

[…] I think governments using social media is a great thing, not to mention it's even become expected.?I recently wrote about President Obama and the White House using Instagram video. […]