What Your Business Can Learn From The Ice Bucket Challenge 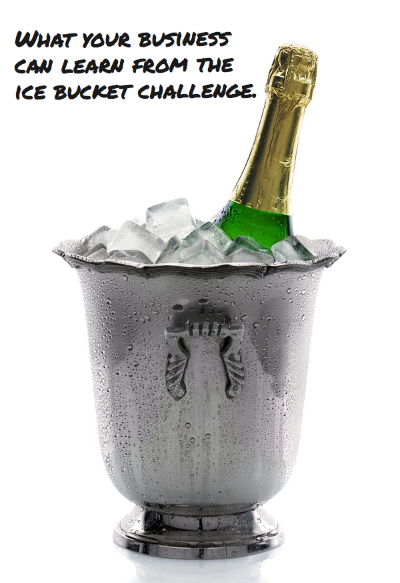 Unless you live under a rock, are completely absent from any and all social media channels (which I doubt as you are reading my blog) or don’t read the news, there is a new viral trend taking the Internet by storm. It’s called the Ice Bucket Challenge.

For those of you who aren’t familiar, the Ice Bucket Challenge is a viral game of “tag” where people are challenged to pour a bucket of freezing cold ice water over their head in the name of ALS or donate $100 instead of taking the challenge. It’s literally taken over newsfeeds across the world. Even former President George W. Bush has gotten in on the action.

While there are some critics of the campaign who say it is a waste of water. As you may know California is in a severe drought and residents are being fined for over-usage of water. In some parts of the world clean water is hard to come by and the ALS Ice Bucket Challenge is insensitive to those with limited access to H2O.

Regardless of what side you are on, there is no denying that the campaign has been a huge success in raising awareness and monty for ALS. And there are business lessons to be learned. Before get into the ideas on how you can create a “viral” campaign for your own business, let’s talk about the fundamental and psychological reasons it works.

Why The Ice Bucket Challenge Has Gone Viral

1. Guilt Factor
Viral campaigns that hit at a social cause are often successful because they make you feel guilty if you don’t get involved somehow for a few reasons. The first reason is that because you don’t want to be a party popper and stop the chain. The other reason is that it is for a very worthwhile cause. Either you do the challenge or you pay. Those are your two options.

2. Good Cause
This hits on one of our psychological triggers. When something is a good cause we are more likely to share it. When we share something publicly it shows that we support something. Everyone wants to look like a good person, right? So sharing about political and social issues and showing your support gives you humanity points.

3. Tagability
The nature of the challenge was that you have to tag 3 more people. This keeps the chain going. From the friend who is taking the challenge’s standpoint, they are going to challenge their closest friends or those who they want to see get wet. When they tag you, it shows up on your newsfeed and all your friends can see it. It’s do or die time.

4. It’s Fun
Like the social cause issue, fun and humor are emotional triggers that have built in social media shareability. People are more likely to share something that is fun or funny over any other type of content. This challenge is clearly a lot of fun.

6. Timing
Timing plays a huge role here. If this were the dead of winter, pouring a bucket of ice water on your head is a pretty bad idea. When it is summer and hot outside, it’s refreshing. Context plays a huge role.

What Your Business Can Learn From The ALS Ice Bucket Challenge

When you are planning any type of campaign, it is important to play into emotional triggers. You really have to know your audience, what makes them tick and why they would want to get involved. The reason behind it has to be solid and it has to be fun. Add the FOMO compound and get some influencers involved and you’re golden.