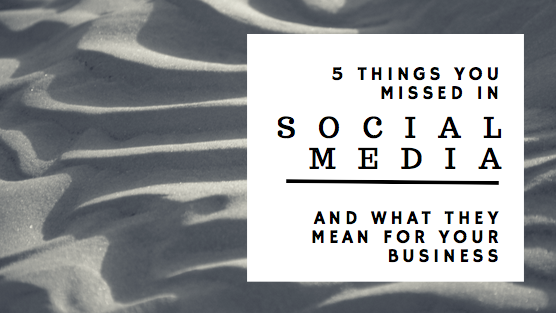 Don’t you feel like if you blink you’ll miss something? Social media is designed that way. It’s all about real-time and keeping up. So in case you haven’t had a pulse on things lately, I’m here for you. Here are the 5 most important changes, updates and things you need to know about right now. But knowing is only half of the battle, I’ll also give you a breakdown on why it is important and what it means for you and your business.

1. Twitter Is Getting Rid Of 140 Characters
Jack Dorsey is the headed back into the lion’s den and is the new/original CEO of Twitter. He founded Twitter in case you didn’t know. Along with ushering in new changes for Twitter, he is also doing away with the 140 character limit. People are on both camps saying that this is a great thing for Twitter and others are saying it is bad for Twitter. I am not as interested in how good it is for Twitter, I’m more interested in how it will affect the way we interact and engage on Twitter.

Here’s what it means for business: It will open up a whole new publishing platform, sort of like when LinkedIn opened up their publishing platform to users. While this is a good way to reach more people, I still strongly believe in the idea that your most valuable publishing platform is your own website. That’s right, I suggest using this long form Twitter for special cases but not for everything. You want to drive people back to your site, get them signing up for more information, and capturing their emails! You can’t do that on someone else’s site. However, there is a huge opportunity to use it for content that you want extra reach. Of course, don’t forget to keep the link

2. Facebook Is Adding A Video Gallery
Facebook has realized that video is the future. Facebook says videos that are uploaded directly to Facebook are immensely popular. I can attest to that. Everything in my feed these days is video of some sort. And with 4 billion video views a day, Facebook understands that the users want more of it. So, in attempts to compete with YouTube, they are adding a gallery where you can search video and find related content. Pretty smart, huh?

Here’s what it means for your business: Your videos have a larger reach with the new tab through suggested videos. In addition, we know people like to share videos on Facebook so if there is a better chance of yours being seen, there is a better chance for people outside your network to share them. But there is also a monetary incentive for adding videos on the site. Video creators will get revenue share like the do on YouTube. So if you create awesome videos you could be seeing a little money roll in for that too.

3. Facebook Added The Dislike Button
Ok, it’s not technically a dislike button, but it is an emoji button giving users the option to do more than just like content. You can now Like, Love, HaHa, Yay, Wow, Sad and Angry content that is shared on your feed. It definitely allows you to express emotions better and I think it is a great thing.

Here’s what it means for your business: More intel for businesses who share content on how the content makes your fans and customers feel. It could also mean more engagement because some people just don’t want to like everything for the sake of liking. If we can express more emotions and express ourselves we might be more likely to do it.

4. Pinterest Advertising Is Available To The Masses
I experimented with Pinterest advertising and it was pretty exciting. I’ll write about it later, but Pinterest is turning into less of a social network and more of a Google for creative things. This new advertising option is still affordable and has good reach.

Here’s what it means for your business: Pinterest ads are a new way to reach people on Pinterest. The conversion rate is not too bad yet and since we are in the beginning phases it is the best time to try it out.

5. Streaming Video Is Taking Over The Internet
It’s all about streaming video these days. Facebook has mentions, Twitter has Periscope, there’s meerkat and blab too. People love to watch what’s happening live and the numbers speak for themselves. It’s very popular and if you can use it correctly you have a great advantage.

Here’s what it means for your business: A new way to reach people in real-time. You can live stream your events, you can interview people, or you can do flash sales. I think the companies that experiment with this first will have the upper hand. I say that about everything. Try try try. If it works you will be ahead of the game.

What changes are you excited for?